Shooting a beautiful fireworks display may sound easy but many people fall prey into letting their cameras do the thinking for them and end up with little dots in the sky or blurry, noisy messes.  The great news is that photographing fireworks can be both easy and a lot of fun with the right settings.  As usual a little bit of prep and using your best asset as a photographer (your brain) will yield some amazing result.

First things first, bring a tripod and use it.  Sure you can try to hand hold your camera steady but at some of the timings we will be talking about later this will be nearly impossible and result in a clean photo.  Now if you like abstract I would say experiment a little bit with shaking the tripod (this will make squiggly lines) or a few hand held shots where you intentionally shake the camera but this is usually only good for one shot at best.  As with any tripod the heavier, more robust the more still your shots will be.  If you have a carbon fiber tripod or smaller tripod, don’t fear; just hang a small weight from the center column if you want to increase the stability.  Some people have been known to hang their camera or lens bag from the center column (think small).  Personally I’ve used my tripod bag filled with a couple small water bottles as a center weight.  Also remember to set your height using the largest tubes first and working down.  The large tube section of your tripod legs are the most sturdy and less prone to shake so you should start their and then move on to the middle tube, only using the smallest tube if you really have to.  This is especially important for smaller, cheaper, tripods.  Also keep in mind that you don’t need to use your tripod at its highest height as you are shooting into the sky.  If you don’t have a tripod then look around and use the most stable surface you can find… a table, a TV tray, the top of your car and then prop up the camera.  Not a great solution but better than nothing at all.

Second set your camera to Manual.  We want to use our brains to set the best settings, not rely on the camera’s brain.  If the camera was set to its own devices it would use settings that would equate to 18% gray and will be easily thrown off by the dark sky.  This will result in the camera sacrificing at least one section of the exposure triangle (ISO, Time/Shutter, and Aperture/Depth of Field).  So you will either get a lot of noise, over exposure or just dots in the sky.

Next, don’t feel you need to use a really high ISO on your camera just because it says so.  The ISO is how sensitive your sensor is to light but at with the trade off that the higher the ISO the more noise in the shot.  I generally keep mine at ISO 100 or 200 depending on what f/stop I want to use, the ambient light and what type of fireworks that are being shot off.  An example is that for a finale where I know there will be a lot of fireworks and white phosphors I will also drop down to the lowest ISO possible to avoid blowing out the fireworks.

That brings me to the next segment of the exposure triangle, aperture.  This is your f/stop setting and the opening in your lens for letting light hit the sensor.  It may seem a little backwards but the lower the number (IE: f/2.8) the wider the opening and more light that hits the sensor, the higher the number (IE: f/16) the less light that hits the sensor.  Your first thought now would be… “oh well I want more light so I need to shoot wide open.”  Resist this urge and let me tell you why, Depth of Field (DoF).  This is the amount of perceived focus in your frame.  If you shoot wide open at f/2.8 then you have a very shallow DoF which results in a sliver of focus because your lens is curved and light is coming in from all angles and bending a bit on the trip in, scattering the light.  A higher f/stop results in a higher DoF because the lens closes down its ‘leaves” forcing the light to come in more like a laser beam with less scattering.  You are working with a large expanse of the sky so this is helpful.  Additionally, when we get to the next section, having the larger aperture means less light which will allow us to keep our shutter open longer without overexposing the sky or fireworks.  I generally find that I like to be around f/11 – f/16 depending on the night sky (ambient light) and if it’s getting close to the finale.  I’ll start to ramp up the f/stop to f/16 as it approaches finale time.

Time or Shutter speed is the last segment of the exposure triangle and is essential to not ending up with only little specks in the sky.  Our eyes can see way more than the camera can see and our brain put what we see in slivers of a second into more like a movie.  So we see the brilliant spread of a fireworks display where the camera is normally looks at it as a sliver of a second which is just a dot.  We can change that by “dragging the shutter” which just means using a longer shutter speed so that the sensor is exposed to the entire duration of the firework and has a change for the light to “burn in.”  Some people will just set a time of 4 seconds but I like to use a setting/mode called bulb on your camera.  In bulb mode I can choose how long I leave the shutter open by hitting the shutter button to start the exposure and then hit it again when I want the shutter to close.  I can go anywhere from 4-15 seconds depend on how much ambient light is around and the types of fireworks (single bursts, white phosphors, mix or grand finale).  You usually get a good feel for it after the first few fireworks.  When in doubt though just plan on 4-8 seconds.  The duration will depend if you want to try and get a single burst or 2-4 in a single frame. If the display has rapid mortar fire, you could use the 4-6 second method.  If the display has single mortar fire every few seconds, one can allow 8-10 or even longer exposure to capture the spread in a nice full pattern.  Also start your exposure a when you hear the sound so you can get a trail (or a little before if you can get their timing).

The last most important setting is focus.  I use manual focus and generally set my focus to infinity but you should check that with your first couple frames.  If you were photographing sparklers or something close then I would still suggest manual focus to avoid focus hunting but obviously with a closer setting such as 6 ft (look on your lens because it usually has a focus scale).

Here are some additional tips that while not super essential, I find them helpful:

1) Use a remote shutter trigger if you have one; that way your force of hand on the shutter button will not shake the initial exposure (especially in case you are a millisecond late to a burst followed by another burst as you will likely apply more force). Even on a tripod you can introduce camera shake, especially with the lighter or less expensive models and ball heads.

2) There are 3 inch shells up to 8 inch shells.  The louder the mortar fire, the bigger the shell.  The loud single bursts will go much higher and usually means a larger spread.

3) You can usually see the trail of the shell in flight. So the start of the aerial display can start to clue you in on the skyline of attack and along with the general height.  Many times those first few frames end up pretty high as a wow factor to the crowd which is great for use to understand our working range of view.

4) Understanding timing of mortar fire to explosion is the key to getting really dynamic spreads.

5) Shoot RAW if your camera can to give you the most flexibility and best image as compression can really start to mess with quality of the image during long exposure captures. Otherwise use the highest JPG setting your camera has (canon this would be high with superfine) to get the best image.

So long explanation made quite shorter…

I hope you found that useful and not too intimidating.  I have great faith you can do this and achieve some amazing results.

Below you will see some images captured by our own Jared Stevens (9 years old at the time) using these settings for the first time.  These are straight out of camera without any Photoshop work, which you can use to make the sky darker or eliminate smoke. 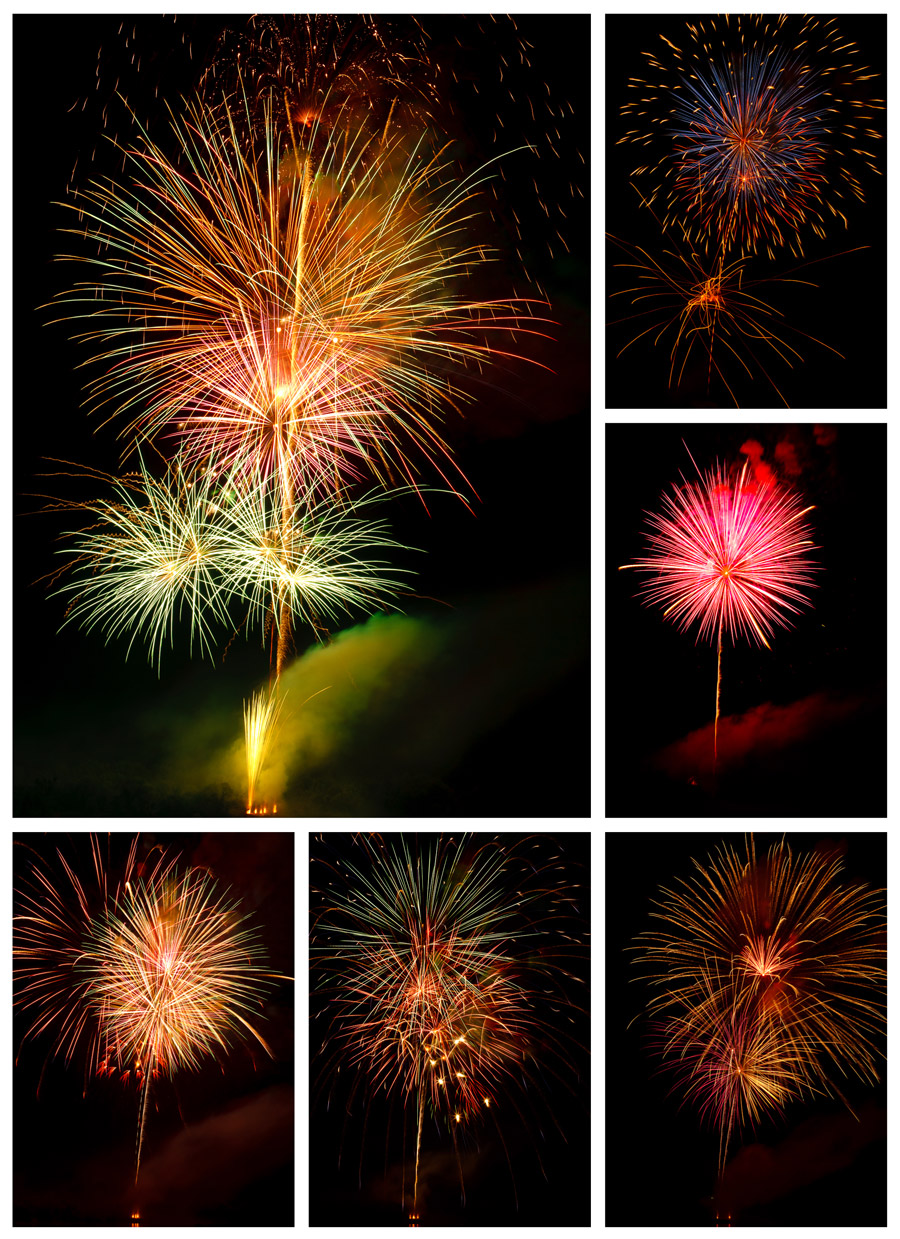